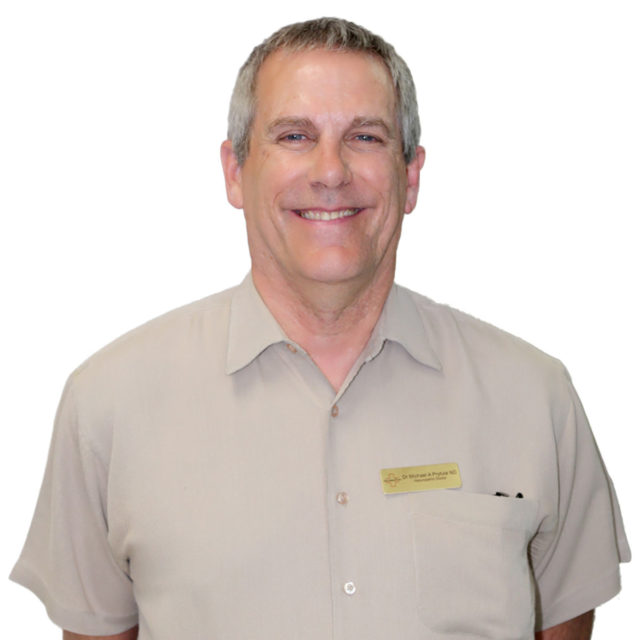 Having gone through his own life-threatening, critical illness and being exposed to the ineffectiveness of modern medicine in his health care, Michael understands what it is like to be critically ill. This life experience has given him special insight into health and the commitment to keep improving his skills and therapies so that he may assist his patients in attaining their best possible levels of optimal health.

Michael’s accomplishments and experiences have truly made him an empathetic and resourceful Naturopathic Doctor. Keeping a watchful eye over every aspect of the clinic, Michael A. Prytula ND is the heart and soul of NaturoMedicTM.com Through his extensive and ongoing training, Michael has developed a very methodical approach to achieving optimal health.

He continues to improve his practice by continually updating, expanding and creating various therapies to remain on the cutting edge of new and improved modalities. He is thankful for the education provided to him by his patients. For one learns most when challenged by difficult cases.

In 1995 Michael A. Prytula ND witnessed a patient die from AIDS and others from cancer, therefore he searched for therapies with documented effectiveness and went abroad for training. Ozone training and certification was received in Lille, France.

In 1995 and 1996 he needed further training in effective therapeutics for cancer, heart disease and stroke. So again he went for training with Dr. Charles Farr MD, founding member of American College for the Advancement of Medicine (ACAM), International Bio-oxidative Medicine (IBOM) and International Society of Chelation Technicians (ISCT).

In 1997-98 he saw many patients who could only eat a few foods and others who reacted with severe allergic reactions. After researching effective therapies, he went for NAET training abroad with Dr. Devi Nambudripad and with others later on.

In 1999 he saw many patients with subconscious emotions inhibiting their healing, and producing undesirable behaviour. After researching effective therapies, he again went for training abroad – this time in Neuro Emotional Technique. He has created a more effective technique called Mental Reprogramming Technique (MRT).

In 2000-01 he discovered that Chronic Stealth Infections were the biggest factor challenging his patients with the most debilitating of diseases. So after researching again, he went abroad for effective training with JMT technique and with Dr. Dietrick Klinghart MD. He is now working on more effective techniques.

In 2001-02 Michael observed that Chemical Sensitivities and Toxic Industrial Diseases presented themselves in patients coming to see him for help. So again after researching, training from the world leaders (Dr. Walter Krinnion ND) in the field was needed.

In 2001 after taking many IV courses and seeing an absolute lack of training in Emergency IV Procedures, he conducted research and created his own course on “IV Worst Case Scenarios”. This course was well-received by his colleagues with 95% of attendees rating it as either very good or excellent in all categories.

IV courses researched and created by Michael A. Prytula, ND include: Emergency Procedures Course, Basic Intravenous Course, Ozone UV Blood and Hydrogen Peroxide Course, and Chelation and Ascorbates course. All courses are approved as prerequisites for practice by the Alberta Association of Naturopathic Physicians and are soon to be approved by other jurisdictions.

Whenever Michael A. Prytula,ND hits a roadblock with a patient not getting results, he inquires why, and does not stop questioning until he is getting successful repeatable results.